Stay up-to-date on the next content published on the knowledge hub!

Our Soils: Our Future

How they were made and how we are treating them.
Thoughts from a farmer/agronomist who loves to talk about soils!

My name is Mark Worner and I am an agronomist with the Agoro Carbon Alliance. Growing up in eastern Ohio at the edge of the American grain belt has resulted in me having a passion for agriculture, as well as turning me into a first generation farmer. During my career in agriculture I have spent most of my years selling inputs. Mainly seed and crop protection chemistry, but during those years I began to observe something that was very alarming. Those observations have led me to where I am today working as a conservation agronomist with Agoro Carbon.

How Soils Were Made

Years ago I was talking with a local agronomist who told me a story that really stuck with me.  He was approached by the pastor of our church who asked him “what is the most important part of a farmer’s operation?” The agronomist’s answer was not what the pastor expected. Without hesitation he replied “the soil”. The pastor was expecting the answer to be something involving the equipment he used or the inputs he purchased, but not the environment where crops were grown. This story has stuck with me because it resonates with how many still view their soils. In many ways we still view our soils as a medium in which we grow our crops, instead of a living organism we need to nourish and conserve for generations to come.

In order to understand our soils better we need to start at the beginning. How are soils made? Soils start their journey when erosion takes place from parent material (stone composed of various minerals). Rain, wind, water, and temperature work together to erode the stone and bedrock. Once bedrock is broken down into smaller pieces the biological process takes over. Tiny microbes slowly consume the stone and excrete the minerals in forms that are available to plants. The process is quite slow and it takes thousands of years to build just one inch of soil. Although slow-moving, the process is pretty simple, but the microbiology involved in the process is where it gets complex. In natural undisturbed soil environments we find an abundance of life. Countless species of microbes, bacteria, and fungi work together to build soils and without them the process of building soil would stop.

The other crucial piece of the soil building puzzle is the presence of plant life. When we have a healthy soil biology and the presence of plant life there is a symbiotic relationship taking place in the soil. Plants are performing photosynthesis and respiration. Breathing in carbon dioxide (CO2), and at the same time absorbing H2O from the soil. Together with sunlight, photosynthesis takes place. Oxygen (O2) is released back into the atmosphere while sending CHO to the roots. Some of that carbon is then released through roots to the microbes I referenced earlier. The plants are feeding the microbiology that is consuming minerals and that microbiology is excreting the nutrients needed for the plants to grow. The plants feed the microbes, the microbes feed the plants. This is how ecosystems that have never seen fertilizer are able to create massive amounts of biomass naturally. Unfortunately in conventional agriculture we have implemented practices that have interrupted the soil building process.

How We Are Treating Soil

A great conservation agronomist once asked me “where on our planet on undisturbed landscapes do we see bare soil?”  After some thought  the only answers I could come up with were desserts and the polar caps. Basically we only see this in areas where the climates are not suitable for plant life. The rest of the natural landscapes are covered in some kind of forest, grassland, or wetland. Now looking at our lands that are in agricultural use, what do we see? Nearly continuous monocultures consisting primarily of corn, soybeans, and wheat. Outside of the growing seasons our soils sit fallow and many of those acres are worked or tilled to manage residue and to attempt to loosen the soil. The issue with this practice is it is a short-term solution to a long-term problem.

Let’s start with tillage. Soils are worked to manage residue and to loosen compacted soils. When we incorporate soils with tillage we expose and destroy our microbiology. These organisms evolved for life in the soil and when we destroy that environment with incorporation we kill a portion of that biology. Another detriment is the loss of glomalin and mycorrhizal fungi. Glomalin is excreted by mycorrhizal fungi and acts like a glue that increases soil aggregate stability and binds our soils together. Tillage destroys mycorrhizal fungi and without the fungi there is no glomalin in the soil. A great way to observe this is to walk in a field that has been worked right after a fresh rain. After a few steps your boots will be covered in slimy mud. This is due to decades of tillage that have destroyed soil structure, aggregate stability, and microbiology making it impossible for those soils to bind together. If you do the same experiment on soils that have not been tilled and have been given enough time to regenerate their biology you will notice your shoes will stay clean when walking through the wet field.

Agronomically speaking we have a lot of options to improve the productiveness of our soils. If our PH isn’t ideal we can apply lime or sulfur. If our nutrients are deficient we can apply micro and macro nutrients to increase their concentrations in the soil to optimum levels for plant growth / yield. However, there is one thing we cannot add and that is soil. Once our soils are gone, it takes generations to rebuild what has been lost, and we are losing soil at an alarming rate.

Recent studies have shown that the United States has lost just under 58 billion metric tons of topsoil since tillage became common practice in agriculture. Overall the amount of tillage being done has decreased in recent history. But even so we still are losing our soils at an alarming estimated rate of 1.9 millimeters each year. These levels are not sustainable meaning that eventually we could quite literally lose our soils. A concept that does not seem possible but can be observed if you know where to look.

The next time you experience a big rain in your area, take a drive. Look for fields that are still being tilled and observe the water running off that field at the surface and or through drainage tile. The water will most likely look brown in color because it is full of soil material (sand, silt, and clay). If possible look for a field that is being no-tilled or no-tilled and planted to cover crops during the winter. The water leaving that field will be much cleaner and clearer because of its aggregate stability and structure. That aggregate stability and soil structure is a result of the healthy biological processes previously explained.  It is important to note that even with our best management practices in place some erosion is still going to take place. 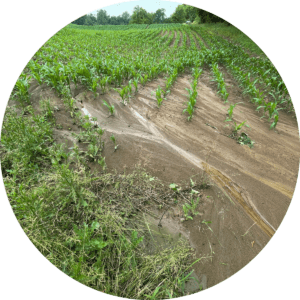 Erosion is a natural process on earth and has been carving and creating landscapes for millions of years. There is no way to completely eliminate it, but what we can do is implement proven agronomic practices that will help to conserve our farms for future generations.

My grandparents and the generations before them were farmers.  During the 1970s and 1980s the next generation lost interest due to the devastating farm economy during those times.  As a result the farms were sold.  Since I was only one generation removed from the farm, stories were often told about all the good times that happened on those farms. Naturally I wished they had never been sold.  Over the years I dreamt of somehow getting back a piece of what was sold, but since we didn’t farm anymore it seemed nearly impossible to purchase acreage.  Luckily for me my brother in law and father in law share my passion for agriculture and in 2018 we began farming again.  As a result in 2022 my wife and I were able to buy a farm of our own.  The primary reason I wanted to start farming again was so that I could acquire some of what was lost and pass that down to my children and the generations to come.  Naturally I have the same aspirations for the soils on our farm.  Without healthy soils our farms are worthless and that isn’t what I want to leave behind to the next generation.  We practice strict no till and utilize cover crops to mitigate erosion and build soil biology. We strive to have a living root in the soil at all times to best replicate soil environments that we see on our undisturbed landscapes.

At the end of the day our time on this earth is short, and these landscapes will be here long after we are gone. We may own these acres now, but they’re not just ours, it’s just our turn to take care of them.

Mark is a first generation farmer with a background in retail as a seed sales and chemical sales representative. Mark earned his Bachelor’s in Agronomy from Ohio State University. With nine years in the industry, he has worked for AgReliant Genetics and Syngenta US prior to joining Agoro Carbon Alliance. Mark’s passion is to educate others about farming, and to provide field level insight into the unique needs and challenges that exist for farmers.

Get news about Agoro Carbon